I just wondered how close to the wind it is possible to fly the spinnaker on a gunmount. I was coming down Milford Haven in my F21 yesterday on a reach in light winds and managed to get the spinnaker flying, the apparent wind was just ahead of the beam. I am just getting used to sailing with it and was surprised at how close an angle it could be flown. You can see the configuration in the attached pic. The port clew line was tight. We were doing 3.5 knots in around 4knts of wind. 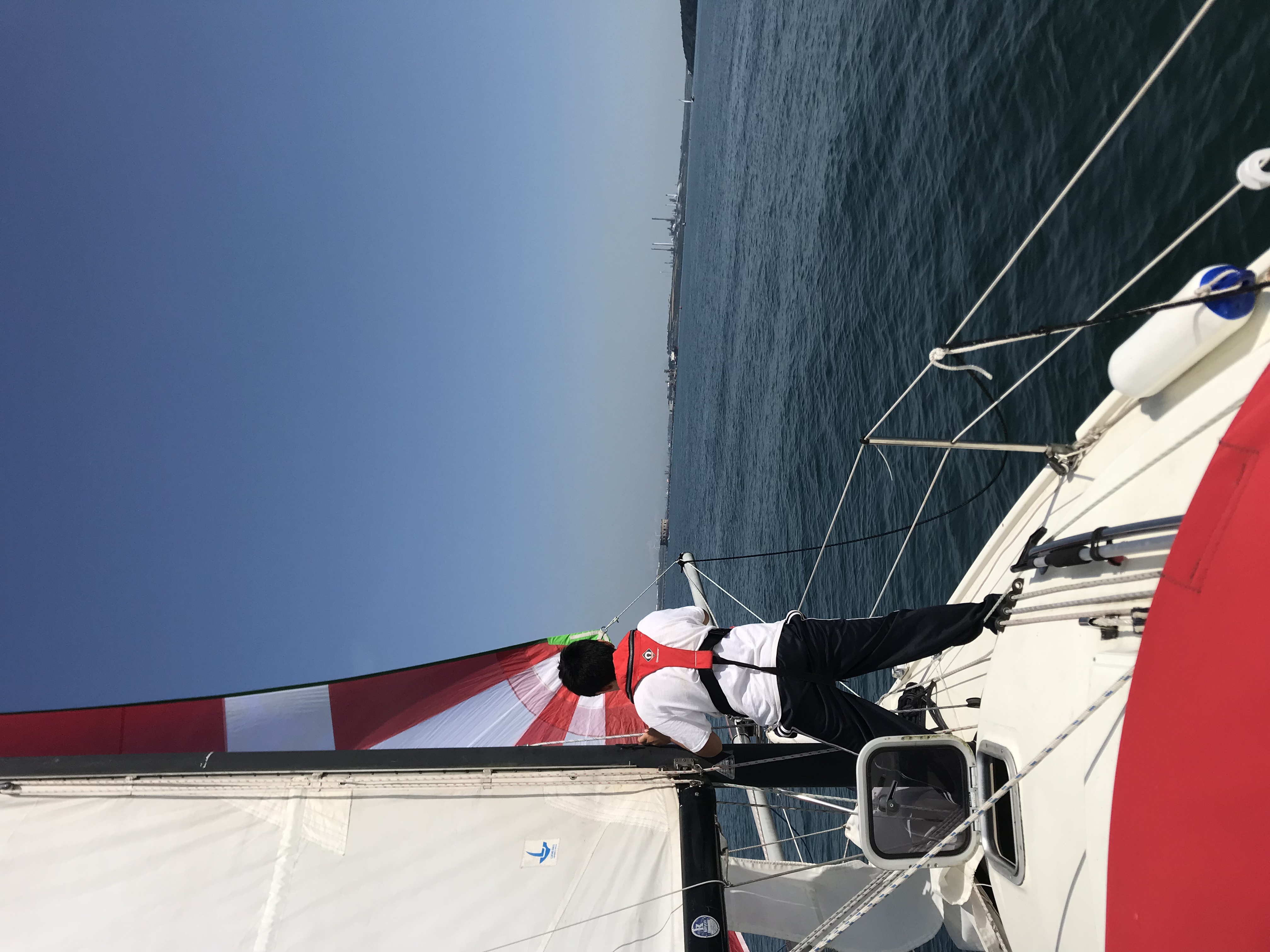 Not sure I’d want to do that in 15knts. Interested in other’s experiences.
Rockin - F21 twin drop keels - located Milford Haven
Wintered in Shropshire where I am when I’m not sailing
Top

Tighten up your tack line and you will have better control. Loosen the sheet until the luff just starts to curl every app. 10 sec. Have fun.
Running an asymmetrical currently.
Stephen Lee
Salacia
F35 Pedrick
Marblehead MA and Rockland ME
Top

Looks like fun! I still haven't ever flown my chute - I got it all rigged up with my new sock and then found out my mainsheet halyard padeye is broken, so I've been waiting on the part.

Is the clew line loosened because the leech gets too tight with the pole at that angle?

I see you just dropped the staysail onto the foredeck. Do you use a downhaul or do you send someone forward to bring it down? Is it secured on the deck at all? I've been trying to figure out how I might be able to use both but it seems like it might be outside the realm of singlehanded sailing.
Ian Sanders
1983 Freedom 21 - Shoal Draft
St Petersburg (Tampa Bay), FL
Top

Stephen, I’m not sure what to call the lower corners on the gunmount rig, both are attached to the pole! I guess the “leading” edge if there is one would be the tack. Anyway, I had loosened the tack in order to get it further to leeward as it was curling with it tight.

Ian, my jib is hanked onto the downhaul of the halliard, it was down as I hadn’t hauled it up on that occasion. I had the spinnaker and jib up for a while yesterday but had to take it down when I moved off a broad reach to a downwind run. I had my son with me again, so he was in charge while I took down the jib. And yes its just on the deck but can’t go anywhere as its still hanked to the halliard which was secured to the pullpit top. Also it has a heavy boom on the sheet. Which stops it flogging. I guess in a bit more wind I would be reluctant to go forward.

You might want to invest in a tiller pilot if you go out single handed and go forward. I have one and use it often. On the same trip here is my son practicing knots while I take some video.

It is fun! I’ll try to post a video when I get back home next week. I’m on mobile data here in Milford Haven and my allowance is getting low.
Rockin - F21 twin drop keels - located Milford Haven
Wintered in Shropshire where I am when I’m not sailing
Top

As promised, a short video of our sail in Milford Haven, getting to grips with the spinnaker.

https://vimeo.com/579819751
Rockin - F21 twin drop keels - located Milford Haven
Wintered in Shropshire where I am when I’m not sailing
Top

I realize watching the video that you were letting the tack up so you could see ahead. When I had a 30, I had the bottom two panels removed so I could see.
Stephen Lee
Salacia
F35 Pedrick
Marblehead MA and Rockland ME
Top

Yes, there is quite a bit of heavy traffic in Milford sound and it did help.
Rockin - F21 twin drop keels - located Milford Haven
Wintered in Shropshire where I am when I’m not sailing
Top

Another video of Rockin, my F21, flying a spinnaker. Making 6.5 knots in about 4.5 apparent on a broad reach. Ian I took some footage of my ST2000 tiller pilot in action flying the spinnaker if you are interested.
https://vimeo.com/587411791 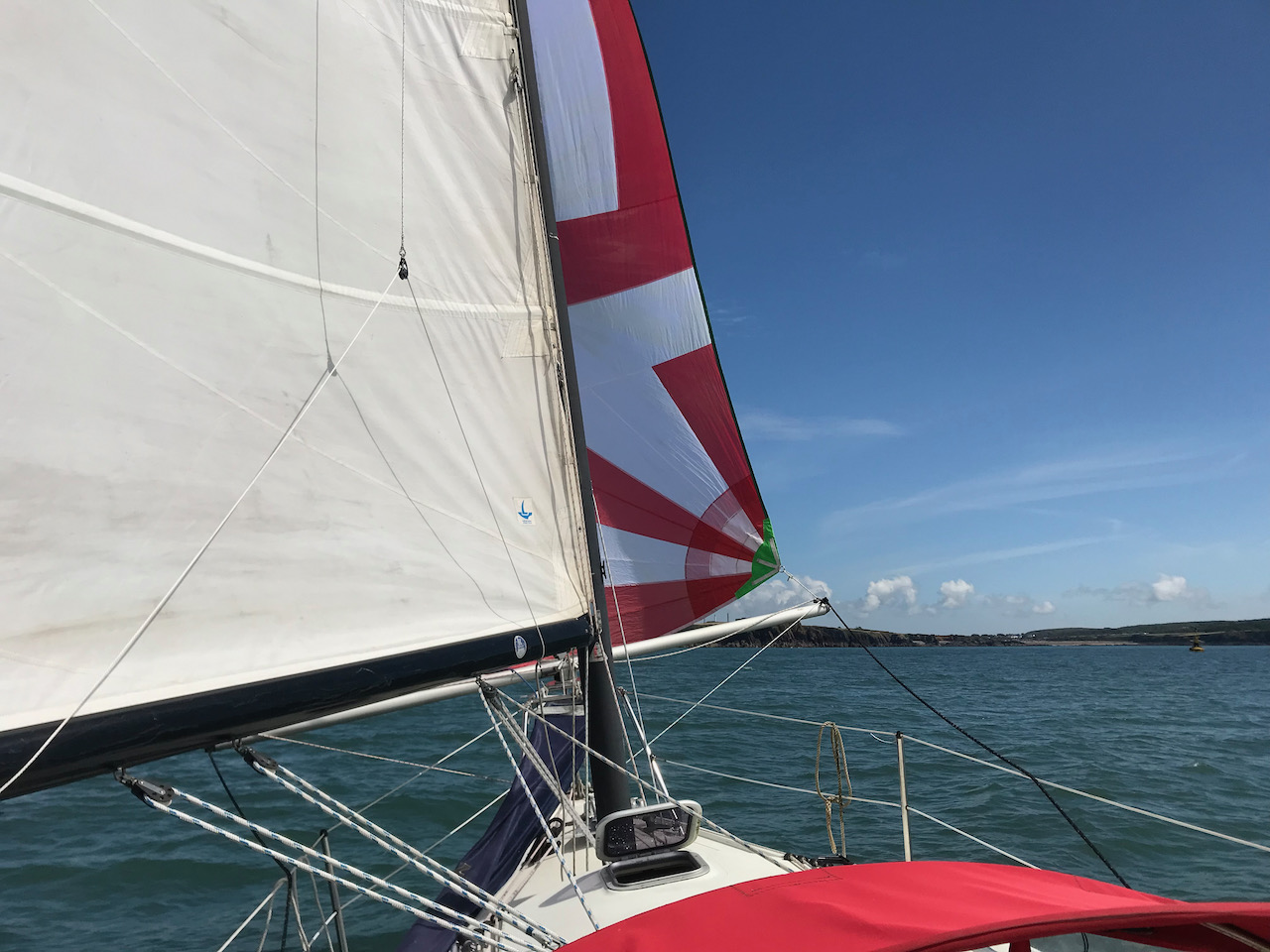 Love the videos, thanks! I need to get one of those blade jibs - the jib that came with my boat is way too large to do that. It takes up the whole foredeck and has to be tied down pretty well to stop it from catching the wind and getting blown into the water. And it's pretty much always overpowered.

My boat actually did come with a tiller pilot, although I've never used it. I need to rebuild the mount as it wasn't done very well when the previous owner installed it. Looks very handy though. I'll have to prioritize that project.
Ian Sanders
1983 Freedom 21 - Shoal Draft
St Petersburg (Tampa Bay), FL
Top

Hi Ian,
I have found that Feronia doesn't like to carry the kite once on the beam. She will but prefers to be broader fo the beam than on it. What I have done is to get a cruising version of a code zero made for me by Kemp Sails. I can use this up to 12 knots apparent and she will happily sail up to 50 degrees to the wind. I use the Hoyt pole as a bowsprit pushing it out and tying off at the mast to keep it in place (sitting on a flat fender to protect the deck.

I have added a picture of kite and the zero. 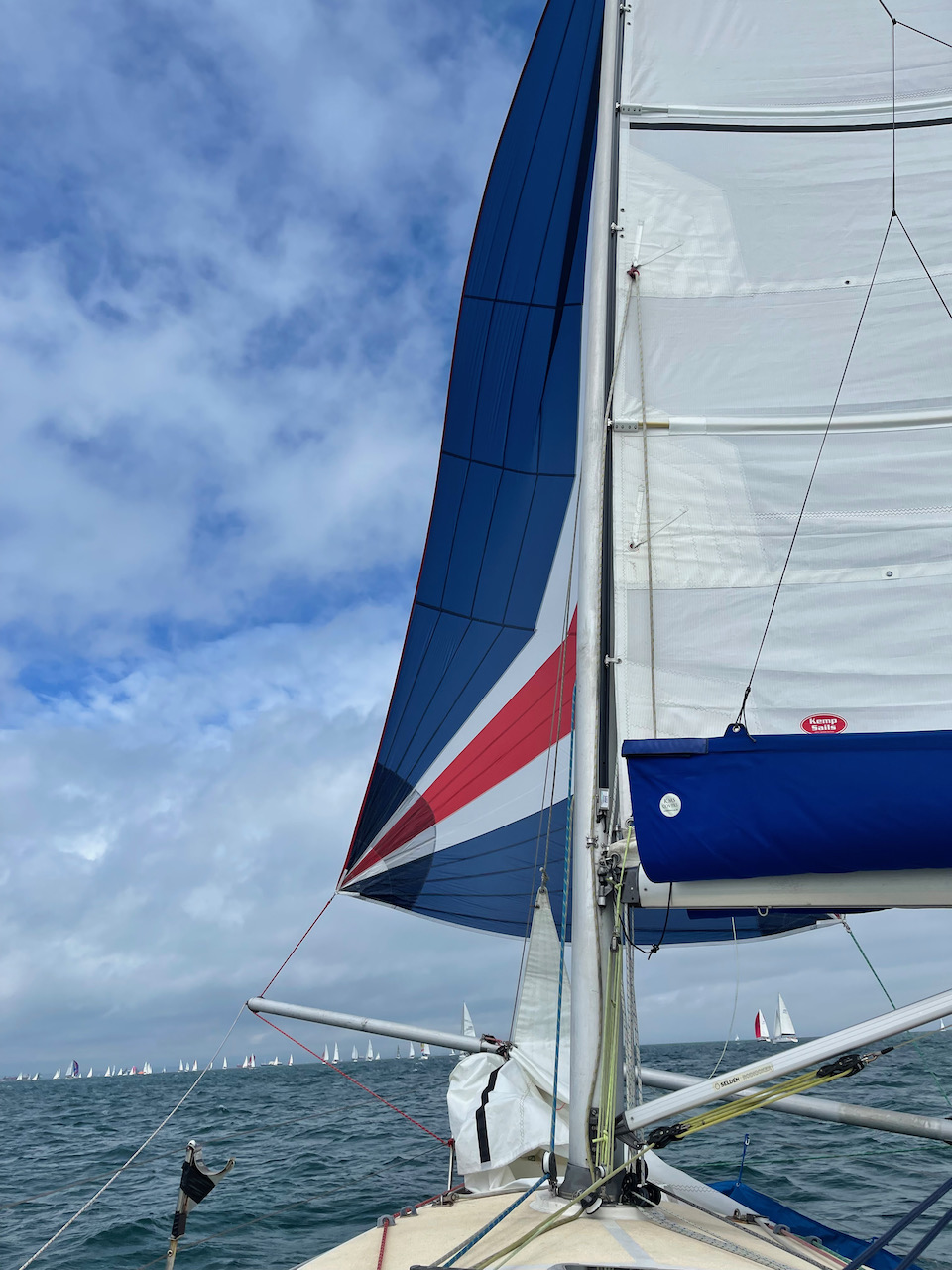 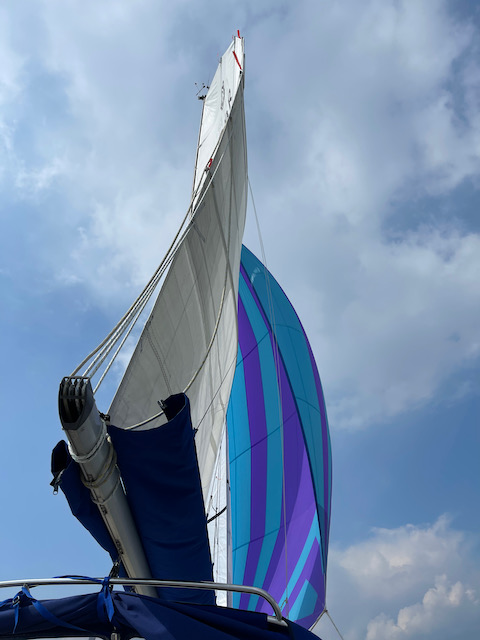 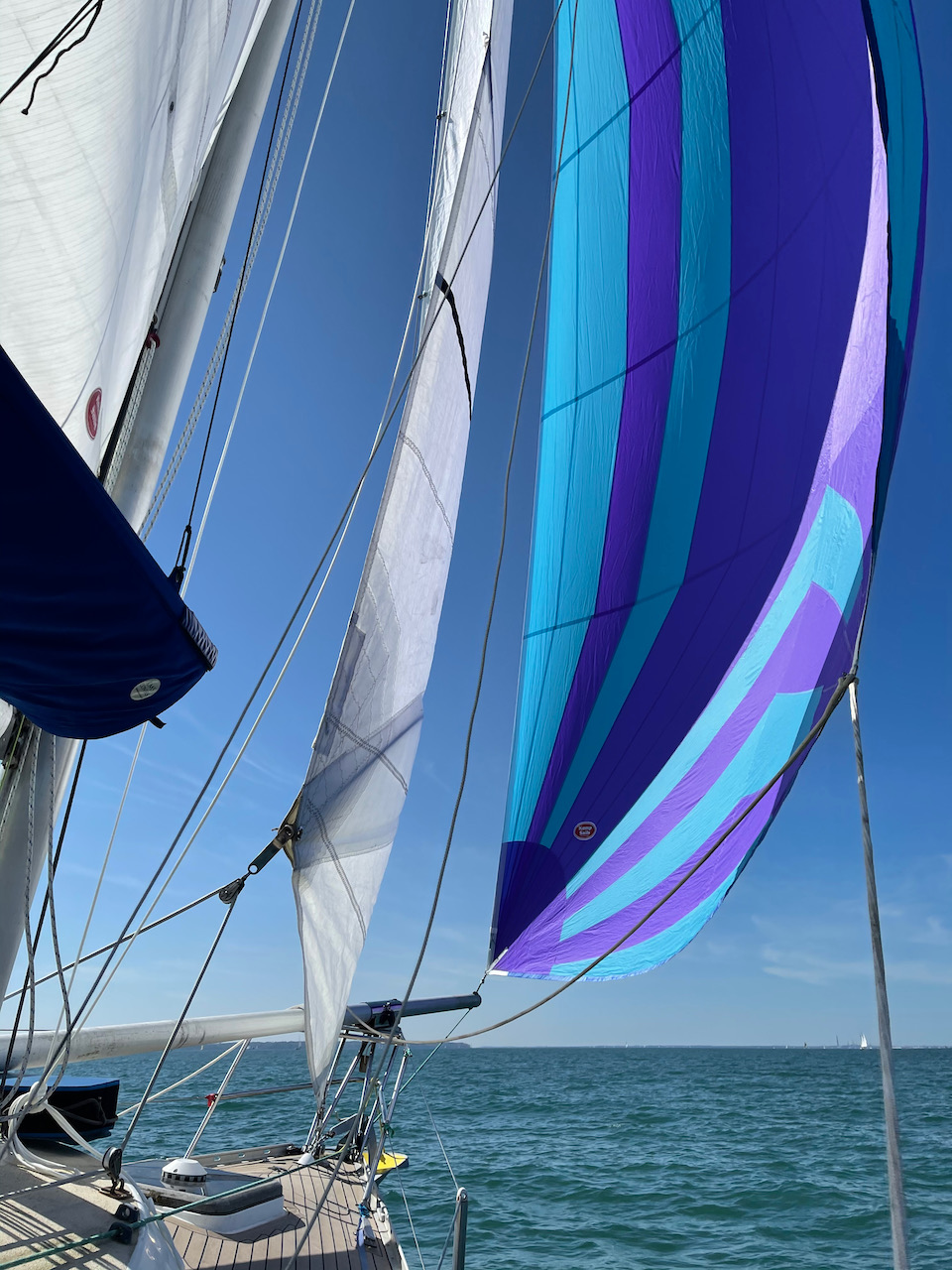