My 82 Freedom 25 has no nav lights any idea where there should be located?
1982 25ft wing mast with 7hp Yanmar diesel
Top

This feels like a trick question: Red/Green - Bow, White - stern, White all-around - mast head. Is there more that you were looking for?

I have a F25 with winged mast, the boat came with basic lighting: on top of mast and on bow and stern but their is no light mid way up the mast as the boat has in inboard diesel I will be power sailing and will need a light mid way up mast to follow marine law. but with a composit winged mast I'm not sure where to mount the needed light?
cheers,
yarrow
82' F25 winged spar, inboard diesel
95' B3 I-14
providence RI
Top

As far as I can tell mine has no lights I found flashlight the previous owner used.
1982 25ft wing mast with 7hp Yanmar diesel
Top

The light on top of the mast is your steaming light -- which means you need to secure the mast so it faces directly fore and aft when you're motoring. Tying off from the "horn" to either a stanchion base or the front of the handrails on both sides should do it.

In this size range at least in terms of the Coast Guard requirements there are 2 options for steaming lights if I remember correctly. One is to have a 360 degree white at the mast head and have that on when motoring and a white stern light off. When sailing masthead light off and stern white on. Red/green bow lights on in both cases. This works well for a rotating mast since the other approach is a problem as the mast rotates.
Top

On my boat there are small SS plates welded at the top of the pulpit and pushpit with mounting holes for a combination running light and a stern light respectively. There is also a hole drilled in the support posts next to the mounting plates that lets a wire be run directly down thru the deck and into the boat for connection to the electrical pannel. The original pannel has a switch for navigation lights, and another for an anchor light.
F25 "Small Axe"
Okanagan Lake, BC
Top

Once more a seemingly simple task has exploded into a massive headache for me (I'm sure it wouldn't be such a problem if I actually had a clue what I was doing). My F25 came with some old corroded and skimpy wires for a wind unit, VHF antenna and masthead light sticking out of the side and top of the mast - see photo below. Since the boat is sitting in my back yard I figured I would fix all that. I twisted the old VHF and light wires together and used them to pull a piece of nylon string down thru the mast as I removed them. I figured I would then us the string to pull the new wires into place. Unfortunately for me only one of my new wires will fit thru the existing hole at the top of the mast - and even that is a very tight fit.

I figure I have three choices here, but since I don't know that much about carbon fibre masts and what kind of abuse they can take I figured I would ask here before I did anything else that turned out to be stupid:

Any insights or warnings before I start drilling would be appreciated.

Whatever I do is going to be difficult as the mast is lashed between the pullpit and pushpit of the boat, and the masthead is hanging out in space approximately 5m above the ground.

Thanks once again for helping the newbie out! 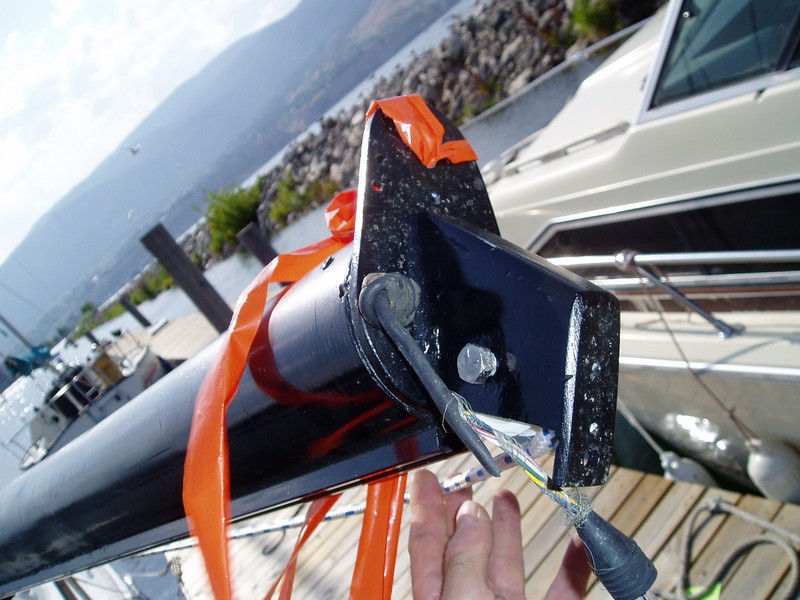 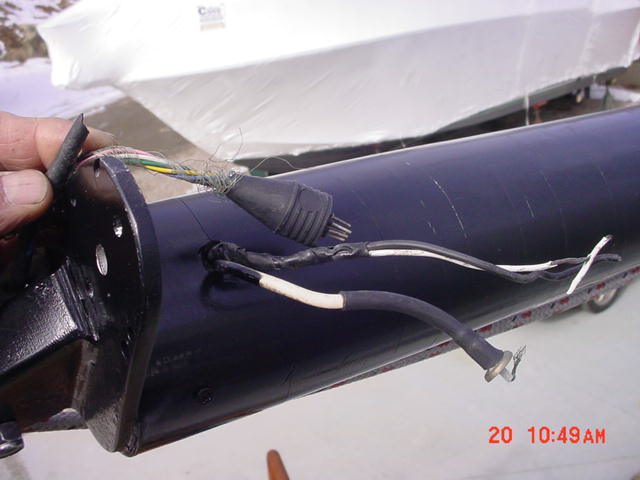 Sounds like a good job for a Dremel with a small sanding drum to enlarge the hole. Using a large drill bit kinda tares up the CF.
Keep in mind, at the top of the mast the loading is much lower. So unless you make a really big hole, no problem.
Also the trick to keep wires from banging around inside the mast is to use tie wraps in a star pattern about every
5ft. Big improvment when sleeping foward and do not have to hear the wires banging around all night.

Slide the mast aft so you have access to it. Nothing says it needs to hang out in space. I would place a saw horse or some other support on the deck so I could sit or stand on the deck while working on the mast. If you overhang too much of the mast off the other end of the boat, you may need to lash the mast down to the deck to keep it from tipping up. Take a little time to make the job easy.

The loads on the mast at the top are minimal so drilling another hole on the opposite side of the mast should be OK. If possible you want to avoid anything that cuts or splits the carbon fibers. Self tapping screws are the worst. Drilling through the aluminum masthead fitting will save the carbon.

Don't forget to secure the wires to the mast itself. You don't want the electrical connections trying to support the weight of the wires.