Hello all!
Designing a solar panel array for Nausikaa.
There is some contradictory/inconsistent advise out there (tech docs from manufacturers vs sailor forums vs else) with regards to the best architecture, particularly on whether to wire the panels in series/parallel to maximise output with partial shading of the panels.
Now, I can only install panels on the cabin roof, and I need 360 watts to cover my daily energy budget.
Key issue here is shading on the cabin roof from the sails (I have a 30' ck), and whether serial or parallel wiring of the panels will minimise the effects of partial shading on overall panel output.
I am asking for practical experience/advise here, from other owners with similar setups. There are some cost implications also (series wiring requires more expensive MTTP controllers). Length of cabling (re voltage drop-offs) and cost of other materials is virtually the same.
Many thanks in advance for the input!!
Rafael
Rafael
s/v Nausikaa
SSR 30570, sail GBR 4619L
F30 CK (Hoyt), wishbones, centreboard, G10 rig. Built by Fairways Marine, Humble, UK, '82
Beta 16 hp with two-blade prop
Top

I have 2 180 watt panels on my hardtop, one on each side of the boom. They are wired in parallel. After 10 years I can say that my setup has worked well for me and allows me to go for days at anchor without additional charging. Ten years of having solar cells has also shown me that given the position of the boom or how the wind blows the boat around at anchor some part of one of the panels will always be in shadow. Solar cells on a movable platform is a good example of a situation were good is great and perfect is impossible.
Top

I went with 1 controller per panel based upon advice from installers to maximize panel output. It's worked well for me.

You want panels that are divided by diodes, so that the shade doesn't stop the output from the part in the sun. You might also want a switch to shut the panels down. I found both my regulator and charger base their output on voltage which will be high with solar operating. When the batteries are low and I charge, with the solar on the charger won't put out any amps.
Just my experiences.
Top

Gents
Thank you all for your input. Continuing with my research and will post updates.
@ Geoff, particularly interested in your setup of having one regulator per panel. Unexpected! I'd like to understand the efficiency rationale your installer gave you for this architecture. Are you using MPPT or PWM controllers? Where did you install the controllers in relation to the location of the batteries?
I have a clear run for cabling on the inside of the cabin roof. It only gets messy when running wires from the cabin roof to the aftmost lockers under the cabin seats, where I have my batteries.
Thanks again for the info!
Rafael
Rafael
s/v Nausikaa
SSR 30570, sail GBR 4619L
F30 CK (Hoyt), wishbones, centreboard, G10 rig. Built by Fairways Marine, Humble, UK, '82
Beta 16 hp with two-blade prop
Top

I have two flexible HQST 100 watt panels installed on my Mull 30. They are wired in series in an attempt to minimize shadowing impact. The panels are very light and I am happy with them. I spent quite a bit of money on an MPPT controller by midnite solar (the marinized kid). I have breakers for the panels and the controller. I like this set up if you have the breaker panel room for it. You can completely isolate the panels which appeals to me and conforms to the controller manufacturers recommendation. Absolutely agree with another poster on actual output. I have never seen more than about 120 watts from my system due to shadowing, sun angle, weather, water, there is always something. Having said this, the 120 watts takes care of my needs unless I am using the AP 24/7. In that case I have to engine charge for about 45 to 70 minutes per day. At anchor the 120 watts is way more than I need. I do not have refrigeration.

If you were to get the arrays on a bracket off the stern you could probably do a lot better regarding power out. I was going for the most secure install I could get and needed the stern for an emergency rudder assembly. So this wasn't an option for me.
Mike Cunningham
Freedom 30 (Mull) Hull #3
Build date...June, 1986 . Freedom Yachts USA, sloop, shoal keel
Gun Mount and pole retrofitted (purchased from a Hoyt Freedom 32)
Yanmar 2gm20F , 1600 hrs fixed two blade prop
e-rud and ocean racing equipment
Top

Hi Mike
Thanks for the input. 120 W actual out of 200 is somewhat disappointing. Hoping for more than that on my install, but actual usage will tell. However, good pointer to size the array. I agree mounting on the stern would more efficient, but my stern is rather crowded; radar pole, wind vane, and a couple of other gadgets, all hanging on brackets from the transom. Also my mizzen boom overhangs the transom by about 40 cm, so brackets are rather large to provide radius for the boom and sheet to move on the traveler. Not an option for me either.

From what I remember, if you're going to run multiple panels off of 1 controller, you would need blocking diodes, which drops the voltage by 0.7V, to protect a panel which was shaded. I'm not a solar expert in any way, shape or form, so I searched the Internet for this and this may help: https://www.coastalclimatecontrol.com/i ... guide.html. I needed flexible panels to mount on my hard dodger and due to the size requirements went with Soliban, which are quite pricey and thus the addition of second Genasun GV-4-MPPT was minor compared to the total system cost. My controllers are about 5' away from the panels.

I used Bruce Schwab to determine equipment and found Bruce to be very knowledgeable. Here's a link to the controllers that I used, but the rest of the site has a lot of good information. https://www.bruceschwab.com/genasun-gv-4/

Great discussion. I recommend calling or emailing Hamilton Ferris. They can design/recommend a workable solution at what I think is a good price. They provided a great recommendation for me with my Sabre 34 for offshore Experiences- again, like Mike said - only run the engine when AP is heavily used. (No refrigeration). Once I installed the system - single 150wflexible panel snapped to my soft dodger with a mppt controller - did not connect to shore power for next 2 years. (Full electronics - radar, AP, wind, speed, depth, vhf, LED lights, etc.)

Ok, here it is finished, at last!

Boat. Freedom 30 CK (Hoyt), '82
Total Panel Output; 400 Watts nominal in total
Panel Size: 1050 X 540 mm each. Have four in all, installed in two separate arrays.
Panel Location: Cabin roof. Location was determined by lack of space elsewhere. However, required re-directing all the rigging from the main mast, which run along the middle of the cabin roof. There is quite a bit of shading from booms and sails. How much exactly, I still can't ascertain in watt terms. In sizing the array, I allocated 20% wattage loss caused by shading. Only foreseen potential problem is the occasional need to step on the cabin roof. Panels are supposed to cope with this though.
Type and Brand of Panel: Elfeland, 100 watt nominal each, monocrystaline, semi-flexible. Have to be, as they needed to fit on a slightly convex coachroof. Chinese el chippo panels, bought on eBay.
Total Cost: About 800 GBP in total. This is only HW - not counting my labour!- Panels were 400 GBP for four. This is for the array.
Measured Efficiency: So far happy in the sense that, moored in a marina but living onboard, the array supplies in excess of daily budget (including running the fridge 24X7). Managed to get 7 Amps from each array (i.e. from two panels) in full sunshine. In October, in the UK, that's not bad. Expect at least double that in any climate fit for human habitation. Anyway, very happy not to have to connect to shore power (or run the engine) when moored!!!
Install: Four 100 Watt nominal panels connected in parallel and wired in two separate, independent arrays; port and starboard respectively, each with its own controller. Reasons for this design are: (1) wish to have 100% redundancy in case of critical failure in one of the arrays, (2) simplify and minimise wire runs to the batteries. In my case, I have two banks of domestic batteries (2X 110 Ah), under the port and stbd bunks respectively. There is a circuit breaker isolating each panel, and a 30 Amp breaker before each battery bank. 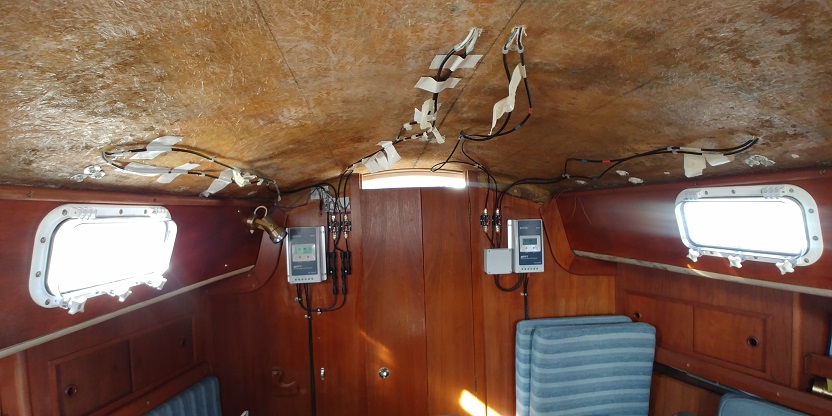 wiring on the cabin roof. Looks a bit messy, but will be tidied and hidden when I replace the lining!
cabin roof cabling.jpg (174.89 KiB) Viewed 6557 times 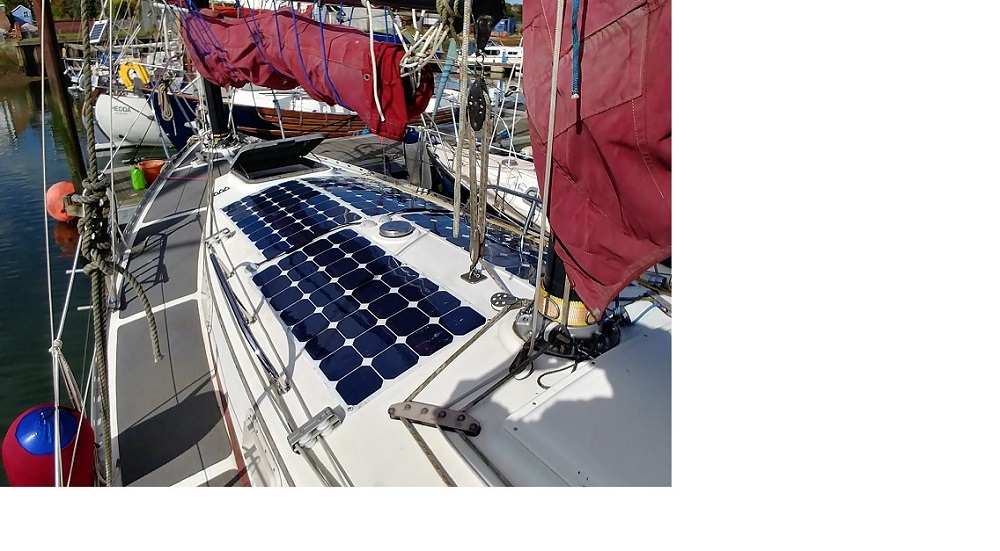