The last time I launched Flutterby, I soon discovered that the cables inside my masts slap quite loudly any time the boat is rolling or pitching the tiniest amount. Yes, I can tell that they are BOTH doing it. Originally this might have happened a little when things were really bouncy, but not like this. It was fine when I hauled a couple years ago [don't ask], but it was not fine as soon as I was in the water.

I think I may well pay to have the masts lifted out (hope my mast wedges separate from the partners nicely!) when I next haul so I can fix this.

When I originally the masts out, the cables were wrapped in (somewhat dubious) plumbing insulation.

I thought I was smarter than that, so I did something different. I cut sponges with a hole in the center and down to the width of the mast, and ran some light string between them with a loop tied loosely around each one to keep the sponges spaced out (about 3-4 feet apart). I'm not sure what happened, but one of my sailing friends was probably right when he said "gravity." I suspect that some way or another, all the sponges are on the bottom of the mast, and that is what I'll find when I get them out.

Flutterby is a (now junk riggged) Freedom 33, and has no internal halyards or other internal lines, so all I need is some way to keep the cables from banging on the wall of the mast(s). That somewhat simplifies the problem.

What have people done, and how long has it worked when you did it?

On m previous, aluminum mast boat, I put 3 zip ties on every couple feet as I ran new wires.

Presume by cables you mean the wiring got lighting that is standing inside. Not sure how this could be done without pulling, or at least lifting the mast.
1984 Freedom 32 #28
Warwick Cove, Greenwich Bay, RI
Top

Yes, by cables, I mean the ones for my masthead lights, VHF, wind instrument, and lightning conductors. I've attached a pic of them before they were installed. I've still got some leftover sponges and cutoff parts of sponges from this job, and they seem to be holding up pretty well. I'm starting to suspect that my string just chafed through, and they all slid down.

When you (or anybody else who did it; I've heard of it before) used the cable tie "star" setup, how well did it quiet the mast, and how long did it work for you? 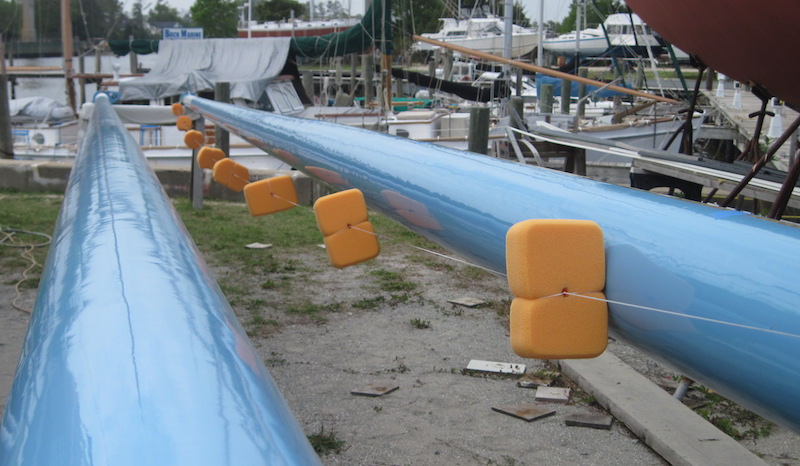 +1 on the cable ties. I'm curious though - on our F40 any mast wire work could be done without dropping the masts. There is an access plate at the top of the crane, and an extra messenger line just in case gravity doesn't work. If you have that option, consider building a crows nest to bolt around the mast and pull up to the height you need. Standing on it is much easier than sitting in a bosums chair for any length of time. Good luck!

Erik and Evi
P.S.: My masts have sponges, too, but the wires go through them. I will have to remove all wires at once...
Top

On the cable ties, I put them in and sailed that boat for only a year and they worked fine. Trick is to not cut the tails off as those are what keep the wires from slapping. I like the sponge idea hadn't thought of that, but if well tied seems that would work well too, as long as the running rigging isn't wearing them down.
1984 Freedom 32 #28
Warwick Cove, Greenwich Bay, RI
Top

Another posible fix - perhaps a bit more labor intensive. When my mast comes down next winter - to permit preparations for retirement cruising - I plan to install PVC conduit in my mast. My boatyard electirician had a very interesting idea. I don't want to drill extra holes in the CF mast - so I will be drilling out a mast track rivet about every 4 to 6 feet and attaching the conduit with the replacement rivets.
Sailmon (Captain Bob Allenick)
S/V Her Diamond
1991 Freedom 38
Cleveland, OH
Top

), which has worked fine from a noise perspective. Another thought which might work for the PVC method that the boat next to me used is to get the PVC ready to go, put a bead of adhesive on it, reinsert the PVC into the mast with the bead "up", and after it is in position, rotate it 180 degrees and wait for the adhesive to set up. I haven't personally tried it and YMMV, but it did seem to work for him...
Top

Yes, the wires do go through the sponges inside the mast. I couldn't find a pic of the wire bundle with the sponges on it.

I don't have any mast tracks, and don't care to add rivets...and am generally reluctant to add PVC conduit inside there. My concern is that if it does come unglued and loose, the racket of a PVC pipe slapping inside the mast will be worse than the cables are!

I don't have an access plate near the top of my masts mast....and the access hole in the bottom is only big enough to feed cables through, not enough to get a hand inside, and hard to get at anyway. I recall it being around an inch or inch and a half diameter.

There is no internal running rigging, so wear from it isn't an issue.
s/v Flutterby, Freedom 33 cat ketch, now junk rigged
Top

I've had the cable ties in for the past six years, and they are still working well (no light exposure, so they don't degrade). I had sponges before (P.O.), and they eventually disintegrated. One season with nothing was enough; I like my sleep. We found the slap was worst when we slept whilst anchored, as our weight in the fore-cabin left the mast exactly vertical. When sailing, there is a slight aft rake, and usually some heel, too.
One disadvantage of the ties is that adding a new cable (or replacing an old one) negates the effect, unless you remove them all and replace all the ties. With a sponge system, using a pull through makes a new cable relatively straightforward.
Gerald Freshwater,
s/y 'Castaway', (UK F35 cat ketch, centreboard, 1987)
Lerwick Boating Club
Shetland Isles, Scotland
Top

I've thought of a new wrinkle on the cable tie solution, given the issue with pulling new wires in....

I've got an extra heavy lightning conductor (#2AWG), and thinking of zip-tying the stars to it. (Did everybody who made these use three zip-ties?) And including one of those screw-mount zip ties with the hole tied into the star....and then circle that one LOOSELY around all the other wires.

That way I could pull a new wire alongside the "starred" cable through all those little rings if I needed to.

Return to “Rigging and Sails”