Today I went to North East Rigging in Concord, MA to pick up a new fore-stay for BlueJacket. They're located in this old industrial building which used to make IBM punch-cards. Along with the rigger was a company named Composite Engineering which among other things, makes parts out of carbon fiber. This picture is part device which spins the carbon fiber onto a mandrel which then goes into a massive oven. They had some huge tubes and masts in there. Very cool!

So, if there's anyone out there who might need a carbon fiber mast, boom, whatever, I suspect that they could make it for you. 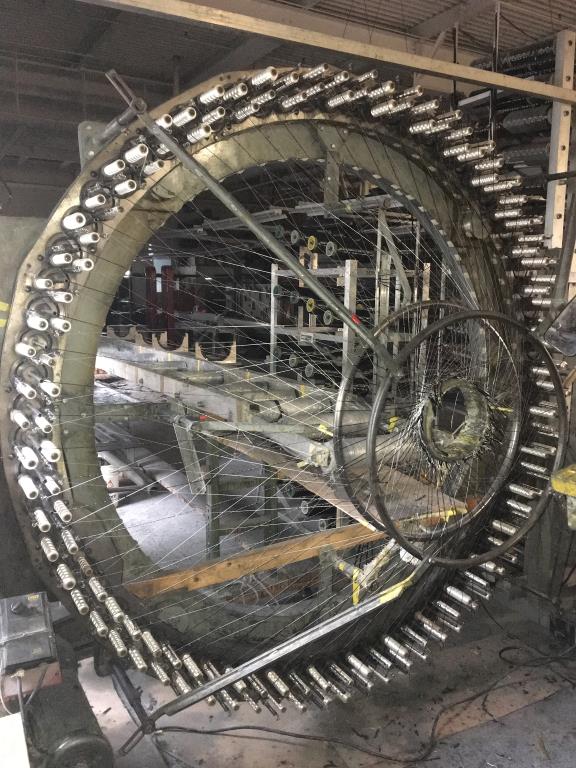 They certainly can build replacement masts. My masts were both replaced by the previous owner around 2005 and were built by Composite Engineering. They are lighter than the original, yet stronger. They also built the new rotating masts for Farfarer.

A few years ago, I also posted an email from Ted Van Deussen, owner of Composite Engineering, on how to properly fasten hardware to carbon fibre masts without affecting their structural integrity.

Great information, thanks for sharing!
John

Yes, that is an interesting topic. I guess it should be somewhat intuitive but the loss of that much strength as a result of drilling a hole at the mast base is an eye opener. I have often wondered what the margins are on our original Freedom masts. They were built 30 years ago plus/minus and carbon composite engineering has come a long long way since then. I note the Wyliecats zooming around the Bay have what appears to be a significantly less bulky mast, they almost look like a windsurfer mast from a distance. I suppose this is due to improved engineering/fabrication but I wonder of our older masts are a case of overbuilt (similar to some early fiberglass boats built like tanks) or are simply more massive because that's hat they had to be back then to get the required strength?

edit: Lo and behold here are the Wyliecats on the Composite Engineering website.

This is interesting Mike - the Wyliecat 30 seems to be 2000 lbs lighter than the F 30, both have nearly the same Sail area. Wyliecat's mast is about 2' higher but they don't have the camberspar. Could the scantling difference be due to weight and fore-triangle differences?
Tom and Stephanie
Good Way II F 35 (P)
1999. Wing Keel 5’
3GM30F, 3-blade maxi prop
Emery Cove, CA
Top

Return to “Rigging and Sails”